What is a Cron Job? How to use it via CloudPanel?

Cron allows you to schedule jobs at specific intervals or dates. It automates repetitive tasks for better system maintenance.

For example, you can create cron jobs for daily or weekly backups. It is up to you which tasks you’d like to automate and schedule.

This article explores what are cron jobs and how to use them via CloudPanel.

What Is a Cron Job?

Cron is a Linux command used for scheduling tasks. It works on Unix or Unix-like computer operating systems.

The tasks scheduled in the cron are called cron jobs. Cron is a Daemon -a computer program that runs a background process.

How does Cron Work?

Cron jobs are executed based on the crontab (cron table) file.

A crontab file is a simple text file with commands that run periodically on a schedule.

The crontab files are stored where the jobs to the cron daemon are kept.

You can have separate crontab files for different jobs. Only system admins can edit the system crontab file.

Unix-like operating systems support many admin users. Each admin can create a crontab file and write commands to perform jobs.

The cron daemon checks the crontab files and their run times. It then executes the tasks to run in the system background.

What is Crontab Syntax?

To create a cron job, you should first know the cron syntax & formatting. Every line in the crontab file represents a job.

The crontab syntax has five fields that show the time to execute the command. It comes with the following possible values:

To set the time correctly, you should also know about cron job operators:

It is used to add “no specific value” for the day of the month and day of the week fields.

Special strings are used to schedule time intervals more easily. Instead of numbers, you can write @, followed by a phrase:

Used to create or edit a crontab file. You can also add, edit and delete cron jobs.

You can use this in the command line to see a list of active scheduled tasks in your system.

For multiple users, you can view their crontab file lists by using this command as a superuser:

The command deletes all scheduled tasks in the crontab file.

You can also use the following command to remove the crontab. It will provide a yes/no option before deleting the crontab.

The commonly used crontab variables are listed below:

You can allow or restrict users from using the system’s cron file. Use the following commands to set user permissions:

Adding a Cron Job via CloudPanel

You can directly add cron jobs with a click of a button on CloudPanel. 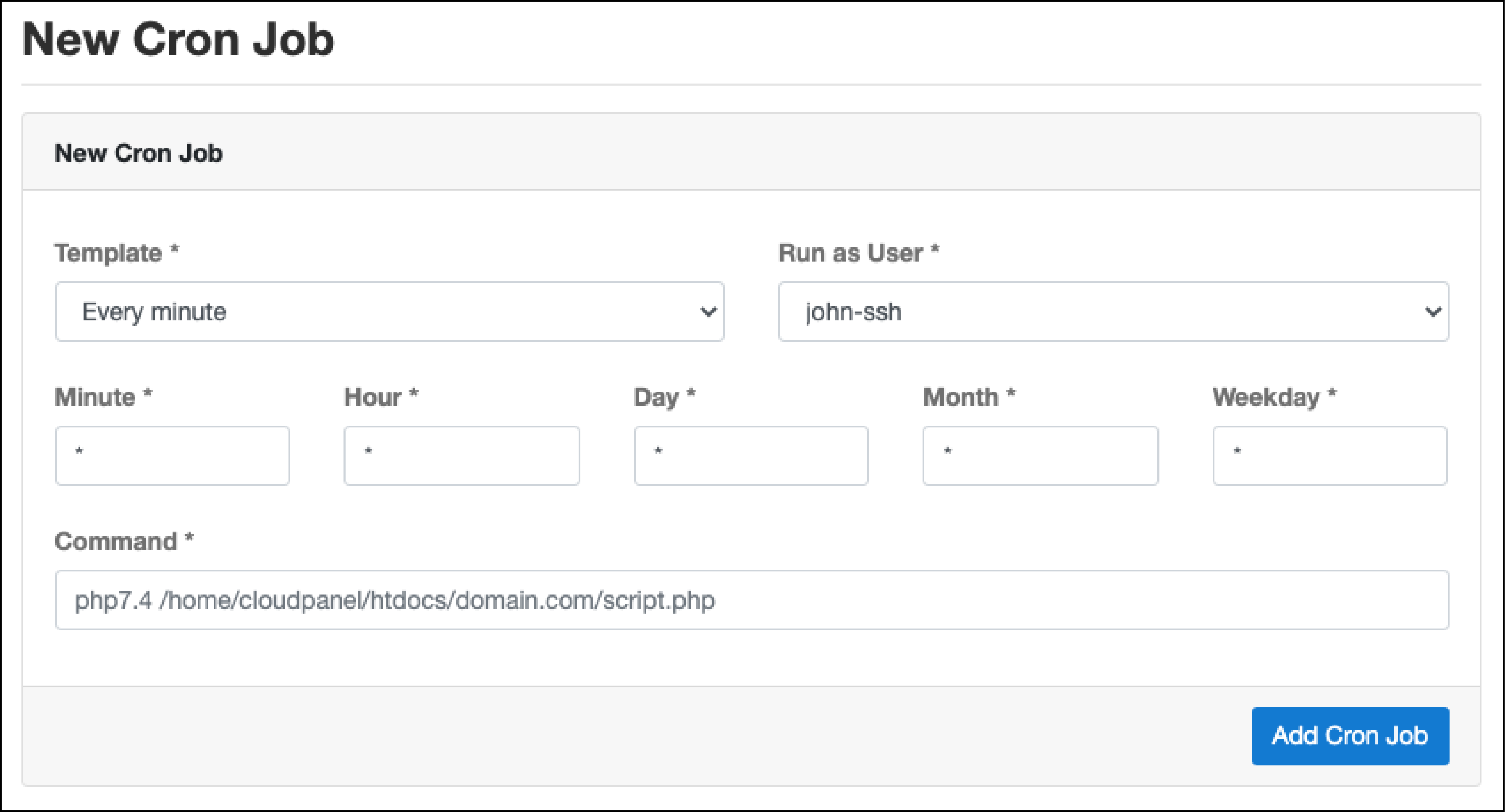 You can also delete a specific cron job by clicking on Delete.

In the Settings section, you can enter an email address. It allows you to receive the output every time the cron job runs.

That way you get notified of executed cron jobs.

Cron jobs are a practical way to manage your server and automate repetitive tasks. The scheduled jobs are executed at the specific time intervals.

You have to enter the commands and pick the execution time. Use the correct syntax mentioned in the article for cron jobs.

It is also faster to create and delete cron jobs with CloudPanel.

To learn more about managing your server, check out the CloudPanel blog.

What Is Cloud Security Management all about?
What is Elasticsearch? Beginner’s Guide
What is Server Management?
Deploy CloudPanel For Free! Get Started For Free!